Jay and I had lunch with our next door neighbors last weekend. I mentioned our upcoming lunch a few weeks back. I planned to serve an arborio rice and butternut squash soup. Jay said we had to serve something with eggs, so I made two quiches, one with mushrooms and one with spinach. OMG they were good. And I was reminded of exactly why we're doing this chicken thing. Just look at the difference in these eggs! 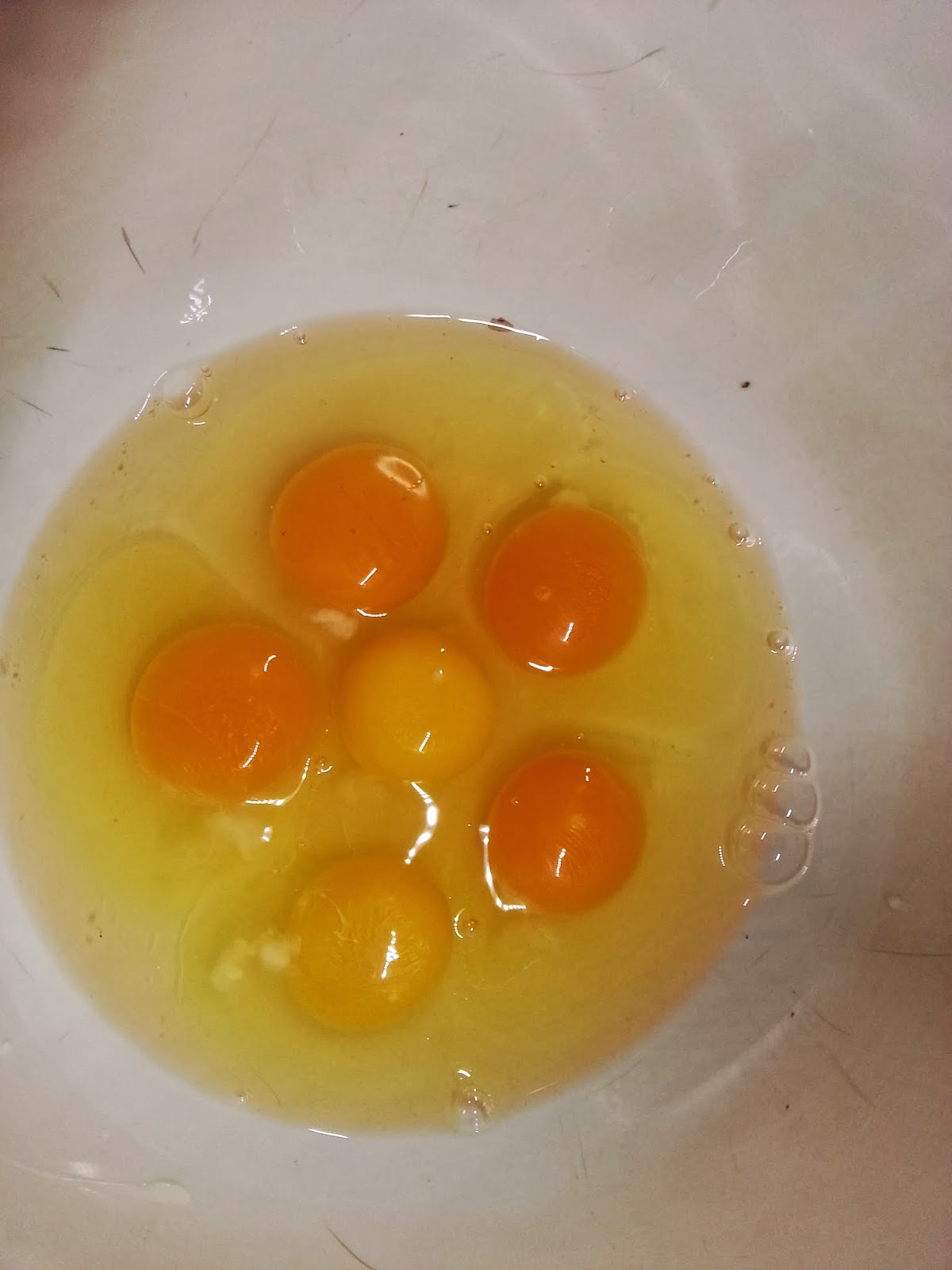 Our gathering went exactly the way I'd hoped it would. We got to know one another, talked about what we each wanted from having a backyard flock of gallus gallus domesticus and enjoyed a meal made possible in part by the three hens we are currently chicken sitting.

I could sense both Matt and Marisa's excitement building throughout lunch, and by the end, we planned a field trip together to Cluck the Chicken Store in Paoli, Wis. to learn more about having a flock and to get some coop ideas.

After lunch we went to visit the girls in the back yard. I popped open the door and was delighted to find someone had left us an egg. I gave it to Marisa (even after today's quiche, we've got lots of eggs in the fridge).

I am pretty darn excited about this upcoming adventure - that has already begun!
Posted by Joshua Feyen at Thursday, February 27, 2014 No comments:

Time to start some seeds

It may be below freezing outside, but inside it's time to start some seeds. My Vegetable Planting Calendar from Madison FarmWorks says that Feb. 26 is the day to plant leeks, onions and shallots from seed. I tried from seed last year but they didn't go in as early (post-hip surgery and PT wouldn't let me do stairs until middle of March!) and were rather wispy. I got a crop out of them, but they were small. This year, seed is in earlier and I've got a sunnier spot in mind.

I like to plant them in a clear plastic salad box. I can plant 100+ seeds in the box and the lid makes a nice, cozy environment for the first few weeks. I'm starting mine on a heat mat - helps with germination.

American Family Insurance, has a blog called "Dream Protectors." I was recently asked to write something for all the gardeners out there wallowing in the snow and the cold. Here's what I came up with.

Building community one chicken at a time

Jay and I are relatively new on our block. We just achieved one year of moving into our home on Mifflin Street. I'm pleased that within the year we have gotten to know some of our neighbors well enough to borrow a cup of sugar (literally), and others who we wave at as they drive by (and they wave back) or who stop as they are walking their dog for a bit of small talk.

These casual friendships are wonderful, and I would like to deepen our friendships and relationships with a few people on the block. This reminds me of a story my dad once told me. Early on when we were on our farm, he met some people who were even newer to the area than my family. This fellow asked my dad, "How do you get to know your neighbors?" My dad replied, "Your borrow something and return it better than when you got it." They then parted company. The next day, that same fellow came up the hill and asked to borrow a tool from my dad - and that family has been life-long friends since.

So with that favorite story in mind and after discussing it with Jay, one afternoon last autumn I crossed the driveway to our next-door neighbor's house, knocked on the door and said "Hi there, have you two ever thought of raising chickens?" No sooner had the word "chickens" left my mouth when Matt called to his wife in the house and said, "Come here, you're going to want to listen to this."

It turns out they were interested in raising chickens, but were concerned that their two dogs wouldn't get along with them. My proposal was to build a coop together on our land (away from their dogs but really close to their house) and co-parent a small flock together. They were in.

This winter we are going to plan our coop, work out the co-parenting details and figure out how to do this together.

This is exactly the kind of thing I want to do with my neighbors, and it feels very much like building community up around me. It's also good to remind myself that community building happens in small increments, and before we know it, we've got something we can all love and appreciate.

Posted by Joshua Feyen at Monday, February 17, 2014 No comments:

What I learned by Day 2 of chicken sitting

A few thoughts 48 hours after taking my chicken sitting job: 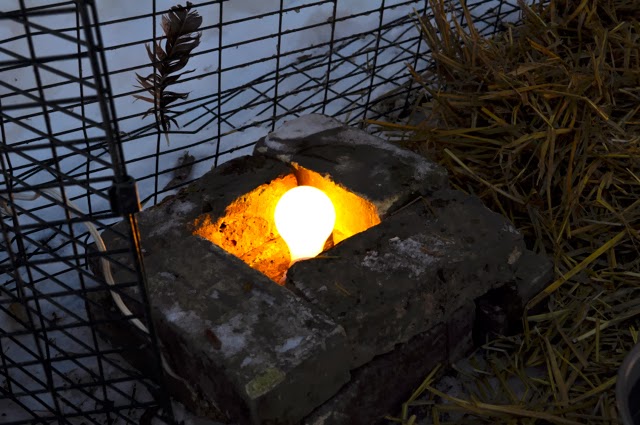 My friend Betsy send me a bunch of suggestions based on the coop she has. If you have suggestion about what you would have done different, please share them! We'd all like to hear.

Posted by Joshua Feyen at Wednesday, February 12, 2014 No comments:

Mifflin Street chicken parade ends in my back yard

These are the three chickens I will be taking care of for the next six weeks while my neighbors across and down the street a few houses are away in their native Australia. Chris and Geoff spent many hours yesterday melting and chipping ice to free the wire chicken run so we could move it into our backyard. Then Sunday afternoon the three of us paraded down the sidewalk and across the street with the coop, run and wagons of food. I wonder what the block thinks now?

Following three educational and amusing hours with Twain Lockhart from Nutrena Feeds, I was both very excited and a little nervous about taking on the responsibility for three lifeforms. Yes, we have cats, but they live indoors, have a cat fountain with a large reservoir and a automatic feeder that delivers cable three times a day. What I'm saying, is I don't really have to think about it more than once a week.

This chicken routine is entirely different. Because of the cage design, it's important to let the chickens out during the day that lock them up in the coop at night. That's not such a big deal except if we want to be away, which at the moment only looks like it may happen once. I have to figure something out to lock them up at night.  So our first experiment with chicken sitting will be an exercise in figuring out if we really want to do this, and how to make it easy :)

Wow. What a great day, and met many people I know and new people. Jane LaFlash, Kathy borkowski, Kate heiber-cobb, Ed from church, betsy true, megan cain, a friend of jay's from high school and many more. Today took another chicken class, mushrooms in the garden, growing tomatoes, pruning techniques, and I stepped into several others. What a fun day!

9:15 Basic pruning techniques
10:30 mushrooms in the Garden
Noon do it yourself first aid and maintenance
2:15 going beyond the basics in food preservation
3:30 small batch preserving
4 volunteer at the Madison area permaculture guild booth

I'm at the Madison garden expo for the first time ever. why hasn't anyone ever told me about this before? Last night attended two classes about chickens and one called a bounty of seasonal fruits and vegetables with PBS's Melinda Myers.

This rooster just stood there throughout both chicken seminars. Just fascinating to watch. I CAN'T WAIT. 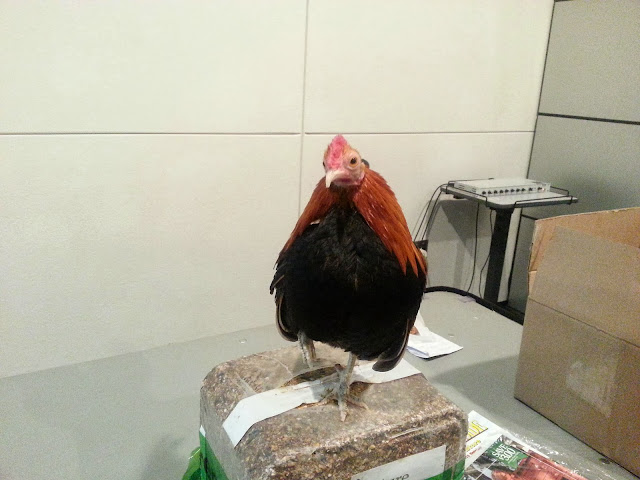 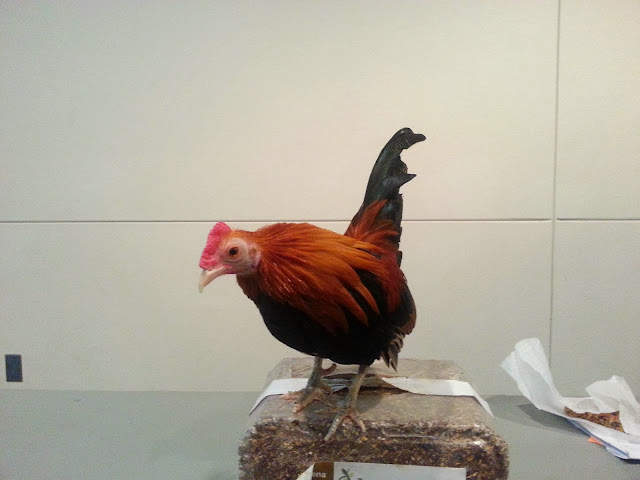