I am am member of First Congregational United Church of Christ. If you live in Madison, that's the big church next to Camp Randall Stadium.

On Nov. 10, our minister, Eldonna Hazen, opened her sermon with a lovely garden analogy that I was so moved by, I asked her if I could share it on my blog.

The overall theme is about recognizing, and sharing our gifts. I hope you enjoy it as much as I did.

If you look at the cover of the bulletin today, you will see plants growing from pots.  Each of these seeds has been planted deep in the soil and surprisingly pushed its way through soil to grow.  Some of the seeds we plant gift us with food, some gift us with beauty.  Some of these seeds will surprise us in ways we hadn’t ever imagined.  They may produce the biggest watermelon or carrots or potatoes we have ever seen.  Some of the seeds may produce the smallest onions or tomatoes.  Some of the seeds may even surprise us by being something other than what we thought we were planting.  “I could have sworn I planted red roses, why are they yellow?”  Or maybe we were sure we planted broccoli and we got cauliflower.  Seeds have a very interesting way to surprise us.  We plant them deep in dirt, we water and weed, but we don’t really know what we have until it pushes through the soil and surprises us.  And in my case, who cares what was planted, I’m just excited and surprised when something I planted actually grows out of the ground.  These are surprising gifts.  Gifts that will now bless us with a bounty we hadn’t imagined or envisioned, but are ours to share.  I will admit, to the avid gardener these surprising gifts could carry some frustration.  But ultimately, I’ll bet every gardener would find use for the bounty that has blessed their garden.

We certainly don’t have to look too far in the First Congregational garden to find many gifts.  Over the last months people have shared “Because of your generosity” moments.  People have reminded us of the many ways this congregation touches and is touched by generosity.  First Congregational is able to change lives because we are willing to use the gifts each of us knows that we have within us.  But what about the surprising gifts?  We all think we know our gifts pretty well.  What if we took the time to re-evaluate our gifts?  What if we were surprised by what we had to give?  Then, what if we surprised others with our gifts, so they too, could benefit from our gifts? 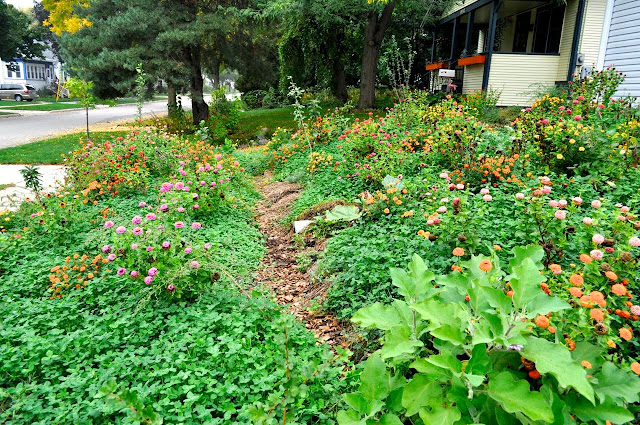 Posted by Joshua Feyen at Wednesday, November 27, 2013 No comments:

I don't drink coffee, but by the smell of the inside of my car, you'd think I had a more than a little coffee problem. Well, you're right, but not the problem you're thinking.

Sometimes I wonder if the coffee odor inside my car is so strong it's permeating the fabric and other materials and long after this coffee jag is over, my car and I will both continue to smell like a rude mix of dark roasted vanilla hazelnut espresso.

Here's the story in a nutshell:


Why coffee? What's the rush?
Coffee grounds are an excellent source of nitrogen. Great compost organic is created by mixing the proper amounts of carbon (in my case, wood chips) and nitrogen (all those coffee grounds).

There are many ratios depending on what goes into the compost mixture, but typically, it's a Carbon:Nitrogen ratio of 20:1. Too much carbon and it stays a dry heap. Too much nitrogen and it gets too hot and kills all the good organism OR it turns into a sloppy, smelly mess. Get the ratio right and it warms up, decomposes and results in a lovely compost for the garden.

Killing grass with wood chips
In our back yard and on the terrace between the sidewalk and street, Jay and I put down a heavy layer of wood chips to kill the grass in preparation for garden beds next year. The wood chips alone will kill the grass but won't be a great medium for planting next year.

Enter the coffee grounds. I pour them on the wood chips, rake them in and let the two work it out.

So, before the snow covers up the wood chips, I want to cover and rake in a lot of grounds so the wood chips have time to decompose over winter and into next spring.

I'm currently collecting from seven different places, and have a morning and an afternoon route to collect grounds, swap out 5-gallon buckets and take them home to spread out. I can't reveal my route or my sources, but I'll share them with you AFTER my coffee mission is complete :)
Posted by Joshua Feyen at Friday, November 22, 2013 No comments:

For the third year, I had the priviledge of representing American Family Insurance at the annual Sustain Dane Badger Bioneers event.

Bioneer is (Bio + Pioneer). Bioneers are social and scientific innovators from all walks of life and disciplines. They are engaged citizens who focus on solving our world's most urgent problems within a framework of interdependence.

I think what I like the most about the conference is the diversity. I met UW students from all over campus, interns at various businesses and non-profits, vendors who have products and services to help businesses become more sustainable, and people who are gardening in their back yards and community gardens and are interested in meeting like-minded people (ok, so that last chap was me).

I don't Tweet much, but I do like to Tweet out salient points when I'm at conferences like this one. So in case you aren't following me @joshfeyen, here's what I had to say during the day. If you'd like to see what others had to say, search Twitter for #badgerbioneers2013

Posted by Joshua Feyen at Thursday, November 14, 2013 No comments:

I attended my third Community Action Coalition (CAC) community garden potluck and networking event Monday night, Nov. 11. Each year it feels a little like homecoming, when many of us who are passionate about community gardens gather to share successes, winge (but just a little) about garden problems and share ideas.

One idea I got from Melissa Gavin might just make me a super hero in my garden next spring. She has a simple recipe of vinegar, salt and soap that will turn Canadian Thistles into wispy crispies. Melissa mentioned in passing she found the recipe on Pinterest - I found one that sounded like here recipe.

I also met a farmer who specializes in small-scale tilling and soil prepping. We may need him next spring if the American Family community gardeners decided to convert our "vine" or pumpkin patch into more plots.

It was also a delight to reconnect with Annette from the Atwood Community Garden. Two summers ago I helped a friend reclaim a weedy plot and Annette lent us a little rototiller. The diminutive machine was GREAT since I had to literally climb up an into the 2-foot tall accessible plot.

Finally, I got to sample some great food! Pumpkin soup. A broccoli soup with a touch of cayenne. Some amazing apple desserts. And a sourdough bread with sage butter. OMG.

But the best part was sitting around the table, good food on our plates and even finer company. I sat at a table for "garden leaders," there were other topic tables as well, like food pantry gardens, and gardens in southwest Madison.

Thanks to Shelly and the staff at CAC for organizing and hosting this dinner. I find it rewarding and very helpful. Like I said, it's kind of like going back home.
Posted by Joshua Feyen at Monday, November 11, 2013 No comments:

Last spring, my husband and I decided to build an orchard at our newly-purchased home.
We could have put it in the back, but I proposed installing the orchard in the front. One of my goals was to make the orchard a focal point for the block, and a learning opportunity about growing perennial food, alternatives to grass lawns and to build community. One way to accomplish my goal was to include our neighbors in building it and harvesting from it.
Just about a year ago, I walked door to door introducing myself to everyone on my block. I apologized for the giant piles of dirt, wood chips and hay bales spilling into the sidewalk. I explained that we were about to install an orchard for everyone on the block to enjoy. And finally, I invited people to stop by to watch, and pitch in, if they wanted.
On installation day, 25 people from many circles of my life showed up, including five neighbors. In four hours, we moved seven tons of compost, spread 25 bales of hay and planted eight fruit trees.
It was, by all accounts, wildly successful. 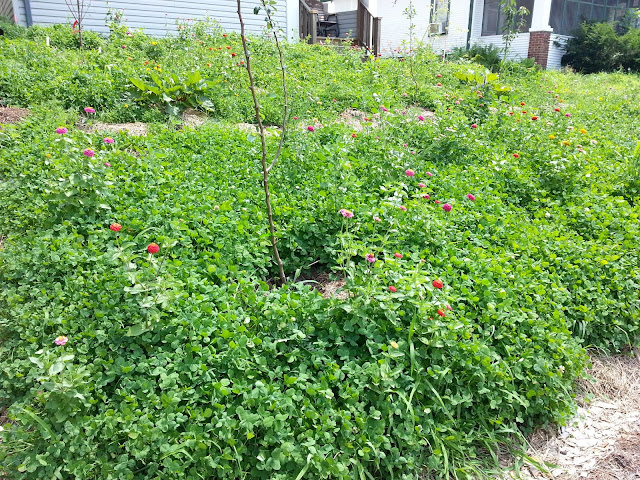 More than a month later, another remarkable event happened. My neighbor, we’ll call her Gloria, walked by while I was in the front yard. She’s on a fixed income and has a hard time getting around and immediately apologized for not being able to help plant trees. I told her she was participating by enjoying it. Then she lifted a small pack of flowers out of her walker’s basket, saying she found them on clearance at a local nursery. I accepted them them as precious gems, and thanked her for the beautiful gift.
The flowers were, however, just the start of what she had to offer. She told me that she’d lived on the block for years, and had never quite felt like she belonged. “But since you did this,” pointing at the orchard, “and invited people to participate, I feel like everyone is so much nicer and like I belong here.”
Her words stunned me.
I asked myself, “Did the block really change that much?” Or had Gloria’s perspective changed? Then I realized it didn’t matter what changed. Somehow, eight fruit trees in my front yard helped Gloria feel like she belonged.
Turns out, I didn’t build an orchard, I started to build a community.
Watch the four-hour orchard installation in six chaotic minutes.

Posted by Joshua Feyen at Monday, November 04, 2013 No comments: