Shout out to Territorial Seed Company

In late May, I planted garlic from a few crowns from my local green house (I favor Johannsen's Greenhouses & Gifts on the Beltline, good selection, incredibly knowledgeable staff).  I knew it was late but I had this patch of dirt with nothing in it and I wanted to see how it would go.

I harvested my garlic plantation in late July and I'm now hooked on growing garlic. Planting and care were easy, garlic stores well and there's nothing like garlic in the winter to fend off the snowy blues. And mine is organic to boot!

I decided to buy a variety of garlic to plant this autumn and went online to see what's out there. Don't do it if you have no will power and a credit card at hand - there's a lot of garlic to be grown. I found Territorial Seed Company in Cottage Grove, Oregon (now that's going to be confusing for my Madison friends) and found a two-variety pack, one pound each. Two pounds of seed garlic cost $42.50 with shipping. But, I'm sharing it with friend Jason and my mom, so after we split it, not bad.

Last night as I was splitting up the order, I noticed one of the cloves was a bit mushy. And at $42 for 16 cloves, each one is about $2.60. Ok, no  big deal, but I thought for this price (the ones at Johannsen's were about 1.50 each) it would be worth a try to ask for a new clove.

I took a photo of the mushy clove next to a healthy specimen and sent an email to customer service last night. When I got home today I had two emails from Territorial Seed Company. First was an apology and word that they would send a replacement. The second was a notification that the replacement had already been shipped.

Thanks Territorial Seed Company, you are awesome!

Posted by Joshua Feyen at Monday, September 19, 2011 No comments:

I love learning, and I love food, so it should come as no surprise that this spring and summer's gardening adventure has me learning and cooking, a lot.

Some of the best learning is the informal kind, a passing comment that makes not just a light bulb, but an entire Christmas tree go off in my head. That happened today.

This morning, my co-worker and fellow American Family Community Gardener Nate walked by my desk on his way to his. We talked about the produce that our gardeners have donated to local food pantries, and then the chat turned to our own plots. Nate has his mostly cleaned out, while I have lots left. I bemoaned my tiny brussel sprouts (both stalks and sprouts) compared to my mom's stalks that are twice as high as mine. I explained my dim hope that the sprouts get a little bigger before a hard frost kills the plants.

"Well you know," Nate said, "If you take the tops off the stalks, the plant will put more energy into  growing the sprouts." Why hadn't I thought of that? Just last week I spent an hour trimming flowers off my tomatoes to force them to move those green fruit along. But Nate had one more thing to say on the subject.

My mind raced to memories of a cabbage soup that I just adore, and I imagined that these brussel sprout leaves would be very similar to cabbage leaves. After work today, I chopped those tops off and took them home and made one of the simplest yet tastiest soups I know of. And yes, I'm going to share the recipe with you. Thanks Nate, for a delicious dinner! 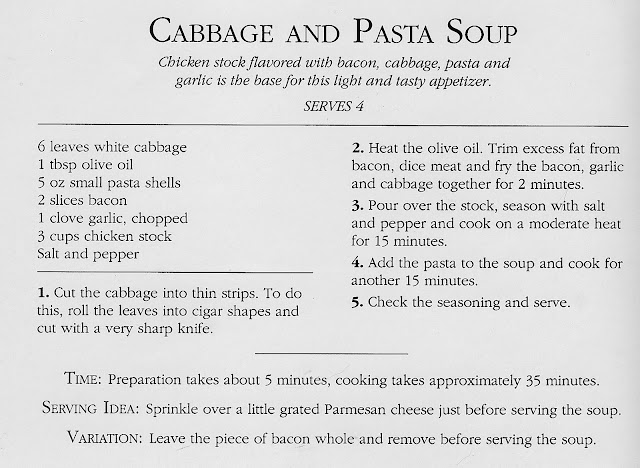 I can't leave a recipe alone (due either to ingredient substitution or an excessive appetite for food experimentation). I used waaay more brussel sprout leaves than the equivalent of 6 leaves of cabbage, double or triple. Cooked 4 slices of bacon (more leaves needs more bacon) and I don't use olive oil (there's plenty of bacon fat). And 1 clove of garlic? How about 5? I also use Better than Bouillon Not Chicken broth.

After an exhausting yet exhilarating day of canning salsa, I sat at the dinner table and announced to Jay, "I think I'm becoming my mother's son."

"Watch your grammar" he replied, "You're using a gerund."

He's right, I should have said "I AM my mother's son."


I was practically giddy after cooking and canning 18 8-ounce jars of home made salsa. My elation was fueled in part by seeing the culmination of all our gardening work preserved beyond the brief shelf life of a fresh tomato. It's also fueled by the joy (and challenges) Jay and I had working together (there was a tense moment among pots of boiling water, bubbling salsa and sterile jars and lids when both of us didn't know what to do next; thank goodness for YouTube videos.) Finally, it's fueled by a strong memory from 30 years ago of my mom stepping back from her pantry after a marathon week of canning and saying to one in particular and all of us at the same time "Well, if we have nothing else, at least we'll have tomatoes."

It was an indelible memory that if the economy or our food supply ends as we know it, it's still possible to preserve food for later consumption.
For our family living on, and for awhile exclusively supported by, a small pig farm, food security was a reality that my mom managed by preserving food from the garden and what we wild-picked in the fields and forests. And while food security is not a current issue for Jay and me, there was still something very satisfying about taking food we had grown, cooking it and knowing that it'll be there in those jars when we want to eat it.

So knowing all that, you may begin to appreciate why it was a such a big deal to me that this weekend Jay and I worked together to preserve what could be the last batch of fresh tomatoes from our community garden. (I say "could be" because who knows when frost will kill the plants). We decided to make home made salsa using our own tomatoes following a recipe my mom uses and got from a family friend. I followed the recipe with few alterations (used honey instead of sugar, and my own seasoning instead of a "taco seasoning" packet.) I know that canning is serious stuff because of the very real possibility of food poisoning, though it's more likely a jar gone bad will explode in the basement before we eat something that could kill us.

On Sunday, Jay departed for a work trip and I was faced with more tomatoes in the fridge (I know, I know, but they were threatening to go bad, and it was the only way to fend off the fruit flies). So, I took what we learned together and did what I suspect my mom did every summer, prepped, chopped, cooked, canned and processed salsa on my own. Four hands certainly did make the job go faster, but I managed not to burn myself or anything else.
I didn't want to make an identical batch of salsa, so I added seven tomatillos and kernels from three ears of corn (had to buy those). I also roasted some of my own peppers on the grill- I love the smokey flavor of chipotle. Blackened the skins of some sweet red bell peppers, two yellow peppers and a few "sweet carmen" peppers, let them cool and peeled the flesh off the burnt skin. About the sweet carmen, there was nothing much left of the flesh after cooking them, they didn't burn away, but the flesh seemed to simply disappear.

The second batch made 11 pints of salsa (recipe said it woud be seven but I added all that stuff). Not knowing much about canning, I just hope the lids don't start to buldge because my proportions were off - I'll check them every few days to see if anything looks like it's going bad.