All about manure - from my perspective

After a recent frustrating and expensive trip to the grocery store, I walked into the house and announced in an exasperated tone “I just bought a whole bunch of shit." That wasn't an accurate statement, however. My grocery bags were full of exactly those kinds of vegetables that this year I hope to grow in my own garden. Today however, I said "I just bought a bunch of shit" and it was an accurate statement. I opened my trunk to reveal nine bags of composted cow manure.

You simply cannot imagine how it galls someone raised on a farm to buy manure at $3 a bag. Manure comes free with animals. It's something that a farmer is constantly figuring out how to dispose of. It stinks, it's ever-present and, like a cornucopia gone bad, the stuff never stops coming. In the spring it's spread on just about every field on the farm as a practical way to get rid of it. As the crops grow taller, there are fewer fields to spread it on. Fortunately, at this time, animals spend most of their time outdoors, which seems to magically absorb the manure.

In early winter when the ground is frozen and there isn't much snow, farmers can still get out to spread it. You've probably driven down the road and seen spoilt snow, ribbons of brown criss-crossing the fields. However, as the snow piles up, so does the manure. And it piles up quickly, because the animals spend most of their time indoors, where it has to be scooped daily and gotten out of the barn.
In the winter, manure piles up in smaller quantities (chicken), in smellier qualities (pig) and some dare to say that cow manure smells “fresh.” All of this manure has to go somewhere, and when it can't be spread on fields, it is usually heaped in the back of the barn or, for the luckier farmer, in a "slurry system." That's those huge blue Harvistore tanks that really successful famers have.
On our farm, we raised pigs. My parents bought a small dairy farm in Southwest Wisconsin, and immediately converted it to a feeder pig operation. Pigs need crates, versus cow stantions. And being very clever, my dad completely regraded the floor to include a sloping cement floor with slotted floor panels above. The pigs stood on the panels, and we let gravity and a bit of water wash the pig manure through the slotted floor down the slope and into a deep trench that also sloped toward the back of the barn. However, this type of slurry system didn't lend itself to piling manure in the back until spring, and since we didn't have a blue Harvistore, my dad had the unique challenge of spreading throughout the winter.
However, for those "lucky" cow farmers, throughout the winter, the manure piles up in a mountain of crap that eventually freezes and becomes a daily reminder that when spring arrives, the farmer has to move that mountain, because Muhammad isn't coming anywhere near it. And this must be where and when some brilliant farmer got the idea to compost cow manure (that means let it sit in piles until it turns into dirt), bag it, ship it and sell it to city gardeners like me for $3 a bag.
Now I'm not begrudging clever farmers. And I know after talking with the good folks at Johannsen's Greenhouse and my urban gardener friend Diane that this is just what I need to build up the soil in my garden beds. It's just that... I'm buying manure. If I had a truck I could go and get it myself from any number of farmers, and they'd be happy to give it to me; probably offer to scoop it up with their Bobcat and dump it in the truck just to make sure I filled the bed as much as possible.
But because I have a car, and I'm in the city, where I can't compost the manure myself (the odors would get me kicked off the block for sure), I'm beholden to buying already-composted manure in 40-pound bags. The bags have a little to be desired, however. As I pulled one of the bags out of the trunk, it ripped, and I said out loud to no one in particular, "Oh shit." For once in my life, that statement was absolutely true. You can see the ripped bag in the photo below.
Well, at least it doesn't smell. 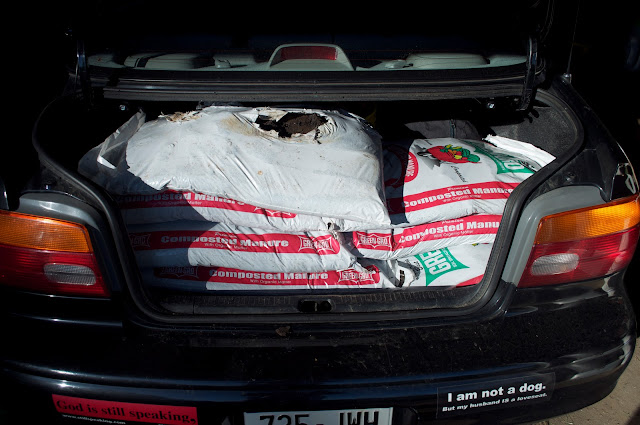