The Last Day of Marge's Garden

When Jay and I moved into our Madison east side neighborhood and I started to build an orchard in our front yard, several people told me about Marge's garden, an illicit, stealth, guerrilla garden on public land, supposedly very near our block. For several years I looked in the general direction that people told me or pointed toward, but I never saw this Brigadoon of a garden. One morning while waiting for the Enterprise car rental office to open (also JUST down the street from our house), I walked behind the building to do a more thorough examination of the area where people told me the house was. You can read more about my discovery.

In late August, as my nieces, nephew and I walked to a beach on Lake Monona, I noticed a bulldozer and several City of Madison workers leveling Marge's garden. They knocked down the field of walking onions, flattened the raised beds and picked through the dirt to remove all the figurines, pots, and rotted wood that had once served as Marge's furniture, garden borders, etc. My nieces and nephew were indifferent—they didn’t have any attachment to the place, but I stopped to take a quick snapshot of the project.

I was saddened by the destruction of the garden. It felt like we hadn't given it a proper goodbye. Ideally, some people might have gathered to remember Marge, maybe take one of the pots, or figurines, or a walking onion for their garden, and then let the City workers flatten it. I'm not saying that it didn't need to go. Trees had grown up and mostly shaded the garden, no one was caring for it, and it won't be long before the Public Market District takes its place. 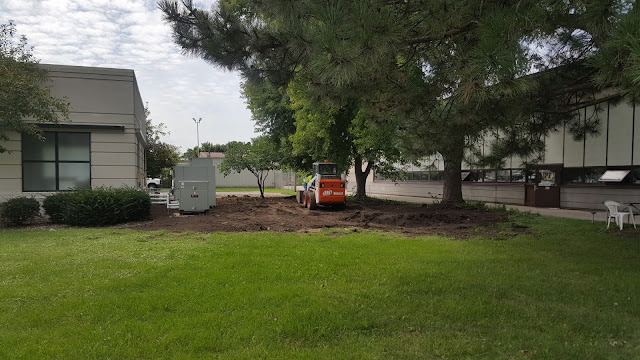 No, all I am saying is that I would have liked to say goodbye to it before the bulldozers erased its existence, and maybe, just maybe, we could have gotten some interest in a little plaque. You know, one of those historical plaques stuck to a nice granite stone that said something like this:

In the late 20th Century, Marge started a guerrilla garden here, growing food where there was nothing more than turf. Tucked between the City of Madison Fleet Services building and a wastewater pumping station, for years no one noticed or everyone looked away and no harm was done, but much food was grown. We remember Marge and her many years of illicit and innocent gardening and those inspired by her.