Chimichurri sauce - what to do with extra cilantro


The best way to have a consistent supply of cilantro is to plant a few new seeds every week. Theoretically sounds great; practically nearly impossible. 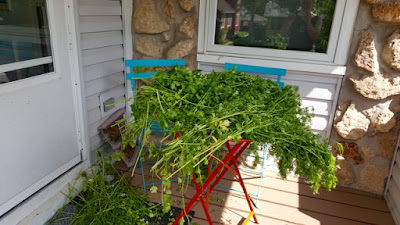 Last autumn one of my cilantro plants went to seed. Didn't think much of it, harvested some of the seeds and ground them into coriander and called it winter. This spring all those seeds I didn't collect germinated (unlike the ones I try so carefully to plant and nurture in my basement) and I ended up with hundreds of cilantro plants in my herb bed.

Seeing all these plants flower and soon to seed, not only did I see the impending disaster I also saw potential deliciousness. Unlike basil, however, I wasn't sure what to do with such an abundance of cilantro. I looked up a recipe for chimichurri sauce and discovered it was wonderfully simple, I had all the ingredients and it would use a lot of the cilantro. 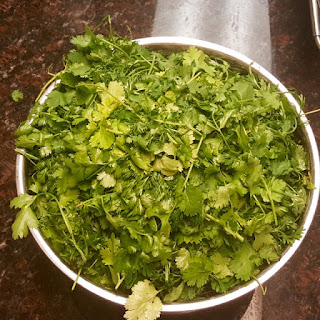 I went out and snipped with a scissors all of the cilantro except one, so it can go to seed, and went to work for a couple of hours picking leaves off the stems. I ended up with nearly 25 cups of packed cilantro, I felt like a king who had just discovered a cave of emerald jewels.

I then peeled nearly 50 cloves of garlic, which mostly exhausted our supply from last year, a good thing to since most of the garlic was starting to go dry and nasty. I then peeled the rest of the onions we had in the basement, also just in time because they were starting to go bad.

The recipe is as follows:

I put everything in a food processor and whirred for a bit, and then pulsed. The recipe calls for the end result to be a bit chunky.

After the first batch, I discovered that there was far too much salt for our taste. Jay and I discussed this, and realizing that chimichurri sauce is usually a meat dressing, often found in Brazilian barbecue, it didn't surprise us that the recipe as called for was a bit salty.

So I added more of everything but the salt. After tripling the other ingredients, the salt got back to where I could enjoy the sauce. And is it delicious!

We made many batches, and froze them in 1/2 cup containers with snap on lids. I'm hoping it as delicious this winter as it is today.
Posted by Joshua Feyen at Thursday, June 25, 2015