We did it. We ordered five chicks. If all goes well, we pick them up Monday, April 14.


Following our field trip to Paoli, Matt, Marissa, Jay and I were excited about ordering our chicks. I started reading my new book, Gardening with Chickens by Jessi Bloom; Jay paged through his first aid guide; and Matt and Marissa read through the book they bought at Cluck the Chicken Store. We exchanged a few emails over the week, and settled on getting five chicks.

Five? The city of Madison only allows four. Even though we're getting them from a local hatchery which will dramatically reduce mortality, just in case one of the chicks doesn't make it, we want to have four the same age in our flock. And as I said to Matt, “Five is okay as long as our neighbor doesn't complain” :-)

We decided that each couple would pick out a pair of birds, and of course I decided to throw in that third. Unlike going to the pet store, we simply called an order into the hatchery. The following images are what they will look like when mature; photos and descriptions are from the hatchery. 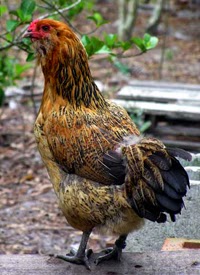 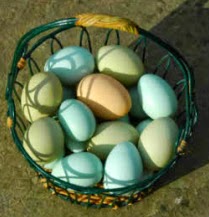 Matt and Marissa chose to get an Americana, also known as an Easter Egger, known for their bluish and greenish eggs. 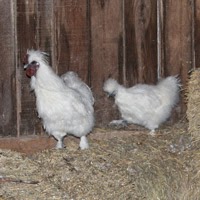 They also chose a Silkie, a smallish hen that has five toes, lays smallish eggs but are the cutest thing you ever did see. 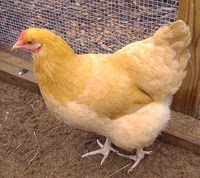 Jay chose to get a Buff Orpington. It's a largish bird, but is quiet and is supposed to have a friendly disposition.

Actually, what we've learned is that if handled gently and with love, most chickens will become friendly. 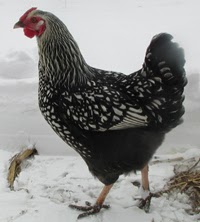 I decided on a Silver-Laced Wyandotte. It has beautifully-tipped feathers, lays large brown eggs and will get to about five pounds. 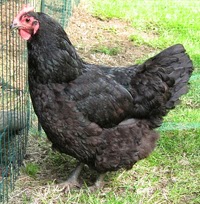 Our fifth chicken, which I'm going to say doesn't belong to anyone in particular, is a Black Australorp, which has glossy black plumage with a greenish purple sheen, and weighs about 5 to 7 pounds.

While we read that indeed, birds of a feather flock together, we also learned that in a flock where no one looks the same, no one in particular gets picked on because everybody is different. We're hoping these birds look sufficiently different from each other that they all end up getting along.

I will write a little more about the hatchery in a future post. For now, were very excited that we made the phone call to order them.
Posted by Joshua Feyen at Sunday, April 06, 2014