"Where do you find them local chicks?"

As we started doing our research on getting chicks, we were surprised to find that you can mail order them! One of the reasons is because within 72 hours of hatching, chicks do not need to eat or drink. Shipping by priority mail is conveniently within that threshold.

However, after talking with Susan at Cluck the Chicken Store and reading some advice on backyardchicken.com (oh my I could spend a lot of time on that site!) we found both were emphatic about "Do not let your children open the box!" due to occasional shipping mortality. We wondered what our local options were.

Susan recommended we get our first batch at Abendroth's Hatchery in Waterloo, Wis. - just  35 minutes from Madison. They may not have the world's largest selection of chickens, but they certainly have plenty for newbies like us. And we don't have to worry about our first experience with chicks arriving with a few casualties.

At this hatchery, chicks hatch on Sunday nights, and are available on Mondays. When I spoke with someone at the hatchery, he was pretty insistent on picking up on Monday so the birds were fresh and healthy.

So Jay and I and our neighbors did some math with a calendar, and after learning that our chicks would need to be in their brooder for 6 to 8 weeks before moving into the chicken coop, we realize that we could easily order them now to be picked up on April 14 and they would be ready to move into our coop sometime after Memorial Day.

I ordered our five pullet chicks (females) to pick up in a week. Anyone want to guess how much a baby chick costs? 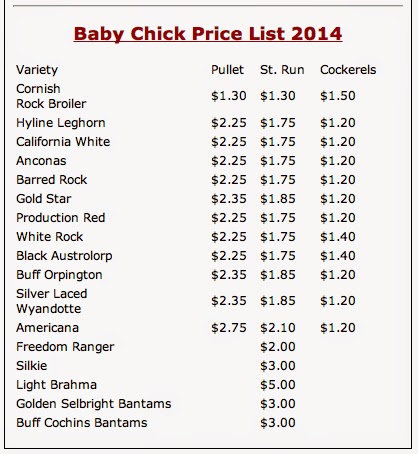